An Inspiring origin, a tradition continued

Inspiring. That might be the best word to describe a visit to St. Jude Religious Store, 4201 Neshaminy Blvd., Bensalem, Pa. , where Russ and Debbie Davis have been doing business for the last 10+ years. In fact , inspiring might also be the best word to describe how the Davis family became involved in the business. In 1961, Russ’ Dad, Russell L. Davis, was diagnosed with tuberculosis, which at the time was tantamount to a death sentence. Mr. Davis prayed ardently to St.Jude , the patron saint of lost causes. In time, his prayers were answered, Russ said, and his Dad was cured. “The disease arrested its progress and never returned,”. Russ said. “(Dad) felt St. Jude was the reason he lived.” So moved by the experienced, the elder Davis founded St. Religious Store in Mayfair in 1965, which he operated until his death in 1981. Four years later , Russ and Debbie took the reigns, and today they operate two stores.

St. Jude’s stocks a wide variety of beautiful items joined together by a religious theme. There are countless crucifixes, statues, pictures, portraits and sculptures of saints and other religious subjects. 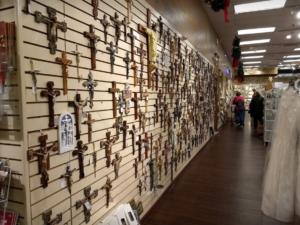 Poignant plaques and paintings make perfect presents; long after that necktie has worn out its welcome, St. Jude’s gifts retain their value because of the meaning behind them.

A large selection of books can be found here, including, Bibles, children’s stories, and parenting guides to help families navigate through the rough waters of society. 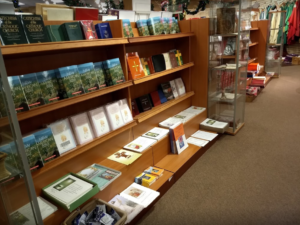 “People are becoming more religious and returning to their faith,” said Davis. There’s also music by the popular Christian recording artists of the day, and seasonal gifts to appropriately celebrate the warmth of, say, Christmas, with more than a plastic wreath.

At Holy Communion time, St. Jude Religious Store is the perfect place to find religious medals, statues, rosary beads, crucifixes, or gold or sterling silver gift items for the child. “Often times, a gift from our store for the child on his other special day retains tremendous personal value because of what it represents,” said Davis